Doogee a smartphone brand to watch in 2017

You have probably never heard of Doogee before but they are making waves in the budget smartphone sector with their X5 range of mobile phones. The latest of these budget phones is the Doogee X5 max pro. The max pro version differs from the other Doogee X5 phones by having an improved specification for not much extra in price.

In our research it was the cheapest smartphone with 2Gb of RAM that we could find. Most other phones in its price range normally have just 1GB. The quad-core Mediatek MTK6737 64-bit ARM cortex A53 CPU running at 1.3ghz is a better processor than what its rivals offer. And the final improvement over the other X5 phones is a 4000mAh battery which means you even with heavy use you should get over a full day without recharging out of the mobile.

Now this is a budget phone so Doogee have made a few compromises to keep the price down. The body of the phone is all plastic so doesn’t feel as good quality as more expensive phones. The screen is a 1280 x 720 HD offering but it only supports 2 point touches and in my testing I found it a bit unresponsive on occasions. It also is quite light on the sensors with no orientation sensor or compass.

The phone has two 8 megapixel camera one at

the front for sand one at the rear but there not going to be able to replace your DSLR camera anytime soon. Photos taken outdoors look reasonable but for indoor pics it only has an LED flash and pictures look grainy in low light. The camera does support HDR (high dynamic range) photos but the camera app advises you don’t move the camera when taking photos with HDR switched on.

The phone comes with Android 6.0 which had very little bloatware installed. Doogee are actively updating the software and the phone downloaded three over the air updates in the week of testing. That amounted to several hundred MB of data so be aware of this if you have limited data allowance. There is mention of an Android 7 (nougat) build for these phones on the Doogee website but it has yet to be made available over the air.

The Mediatek MTK6737 CPU in this phone is a big improvement over the previous Mediatek processors. On the Antutu test the Doogee X5 Max Pro scored 29426 which is over 10000 points more than the previous X5 models – which had the MTK6580 CPU. A score of nearly 30000 is usually found on a mid range phone costing twice as much as the X5 Max Pro. And only a couple of years ago top end phones would score a similar Antutu benchmark. 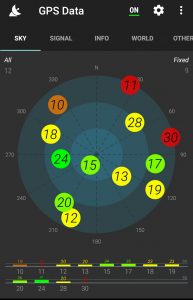 Previousy phones with a Mediatek chipset have been poor when it comes to AGPS performance, having difficulty locking on the the satellites. Thankfully there were no such issues with the X5 max pro during testing of the GPS it locked onto the satellite very quickly – 15ms – and found 9 of the 12 GPS satellite’s. This performance was replicated when using it as a Sat-nav for turn by turn navigation using Google maps where it found its location very quickly.

Connectivity on the Doogee

The phone does have support for USB OTG which allows you to connect it to a variety of USB peripherals. I tested it with a USB mouse and keyboard which worked fine for controlling the Android OS and a memory stick which I was able to use to transfer files to the mobile.

Unfortunately the X5 max pro does not support MHL video out via HDMI and it appears that the miracast screen mirroring option is missing from the display settings. This may have been done by Doogee as they thought that the phones performance wasn’t up to scratch for screen mirroring or it maybe because they want to enable this on their more expensive phones. There are 3rd party screen mirroring apps available in the Play store but I didn’t have a suitable TV or miracast dongle to test them with. You can use the phone and a Chromecast dongle to send the videos to a big screen but only if the app or game supports it.

Gaming on the X5 Max Pro

During the testing of the 3D performance the phone scored 2387 on the Antutu test and the 3D demos were jerky. But in real world game test the Riptide game ran smoothly with the graphics turned up to the maximum details. Because this phone has 2GB of RAM it also can be used to play the Pokemon Go game. Unfortunately the lack of orientation sensor meant I couldn’t get the augmented reality part of the game to work but everything else seemed to work ok. At prices between £70 – 80 This makes it probably the cheapest phone you can play Pokemon Go with.

If you are looking for a cheap phone with 2GB of RAM and your not bothered about the branding the Doogee makes an excellent choice.